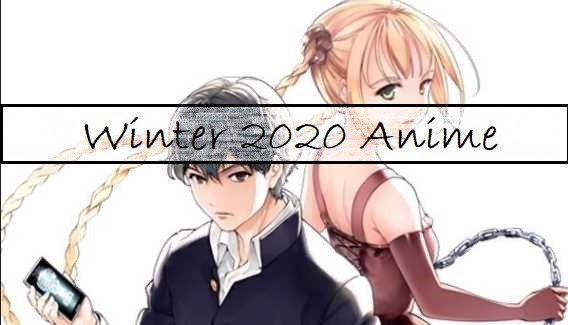 Well, Winter anime that is. We don’t have winters here. So yeah, Winter 2020 anime is coming! With the Fall 2019 anime season having just about come to an end, it’s time we usher in other exciting new anime in this Winter 2020 anime season. Same thing goes, I’ll be looking out for the most interesting and promising titles that would stand out to an ordinary anime fan such as myself. And of course, no prequels!

Few things to take note, I’ll be looking at how fascinating a title looks in terms of it’s characters, story, setting, art or anything that makes it stand out from the rest. Perhaps this time, I won’t be too heavily Isekai favoured. With that said, here are the Top 10 anime I’m looking forward to watching next season!

I’m pretty sure I’ve played seen my friend play this game before. If my memory serves me correctly, this is an anime about cats and maids as waitresses? But it’s odd that the genres listed didn’t include ecchi, since I’m pretty sure the game had a lot of sexual scenes. Hmm, guess it’ll be interesting to see how the anime adapts this.

Sounds pretty messed up and violent. Not usually a fan of this, but I feel like this one might raise some interesting real world shady topics. It’s so crazy looking that I have to give it a try.

8. Somali to Mori no Kamisama

An adventure fantasy slice of life? Three of my favourite genres packed in one, I’m all for that! Well, as long as it isn’t too boring, I’m pretty confident that I’ll have a ton of fun watching this series. But the fact that the main characters seem to be father and daughter, I think it’s already confirmed that I’ll definitely love this show. Please don’t let me down!

I was quite drawn into the premise of this show. A story about a short model and a failing designer coming together to hopefully unite their dreams and succeed together. I feel like if this one does well, it will end up being quite a special anime.

Honestly I liked the grim nature of this show, accompanied by the mystery genre tag that promises twists and challenges. But at the same time, I’m not too convinced that it can do well enough to surprise me. But hey, I’ll include it in the list anyway.

Plunderer sounds EXACTLY like the movie In Time (2011). But even if it were a plagiarised concept, I quite liked the movie In Time. So if the anime does it right, it could turn out to be one of my favourites as a pretty epic adventure anime, with lots of dramatic suspense and potentially meaningful deaths. If it were to follow the movie as well, then I’m expecting some interesting disparity in social statuses to keep things interesting.

I definitely need to find a shorter form for this title, but this totally sounds like it’s gonna be so much fun! A character that pumps everything into defence? I’m laughing at the idea already. I can’t wait!

Incredible realism and infinite possibilities, all jam packed into a full dive VRMMO? I’m sold. Rather than isekais, I’ve always been more of a fan of the game genre, so this is pretty awesome.

Ahh, I’ve already said I wouldn’t include sequels, but this doesn’t count does it? Apparently it’s an alternate reality! As a huge Re:Zero fan myself, how could I possibly not have this in the list?

I’m positively sure that I’ve heard of this title somewhere, but for the life of me I can’t remember what I heard about it. Either way, Darwin’s Game sounds like quite the interesting story, and of course, the whole “can’t log out from game” plot is still always interesting to me. Definitely looking forward to this one!

For my honourable mentions, I feel like they’re still anime I would watch, but fall off slightly from the main 10. Probably because I’d only watch these in certain moods. But they still look really interesting, so here they are!

Also, I need a better way to list these. I find that listing these 10 just like that seem kind of boring. I’ll probably think of something better for the next anime season. Thanks for reading!

I write, read and watch all things Anime

Check out my mate!